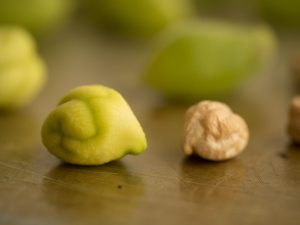 For most of us, chickpeas (a.k.a. ceci or garbanzo beans) come in two forms: canned or hummus. Folks with a penchant for long, slow simmers will also recognize dried chickpeas, the form that most resembles a tiny, winkled brain. (Soaked and simmered, they’re much better than the canned version; make a big pot, freeze 1- or 2-cup portions in their cooking liquid, and you’re set.)

Fresh chickpeas are less common, even here in what a fellow food blogger referred to as “the land of eternal produce.”

In their pods, fresh chickpeas look like miniature edamame, plump and slightly fuzzy. The pods are inedible, but it’s easy enough to pop them open. The beans within — bright green, nestled one or two to a pod — look sort of like tiny green brains, and sort of like anatomical hearts, and even, if you squint a little and use your imagination, like chicks. Sort of.

Straight from the pod, fresh raw chickpeas taste a lot like fresh green peas. Or, as a visiting friend said upon tasting her first one, “It tastes like spring.” Even the kids liked them — we tried them as our new food for this week.

I can’t actually tell you what they taste like cooked, because we ate all of ours raw, standing at the kitchen island. But according to the internet, the best way to cook fresh chickpeas is to leave them in their pods, toss them with a little oil, and then toast them in a hot pan for a few minutes, until the pods start to blister and blacken in spots.

Remove them from the heat, sprinkle them with some salt (and, if you like, some chile powder and cumin or whatever spices you’re into these days), and eat them with your fingers. The nice thing about this is that it makes your guests shell the beans themselves, saving you the trouble.